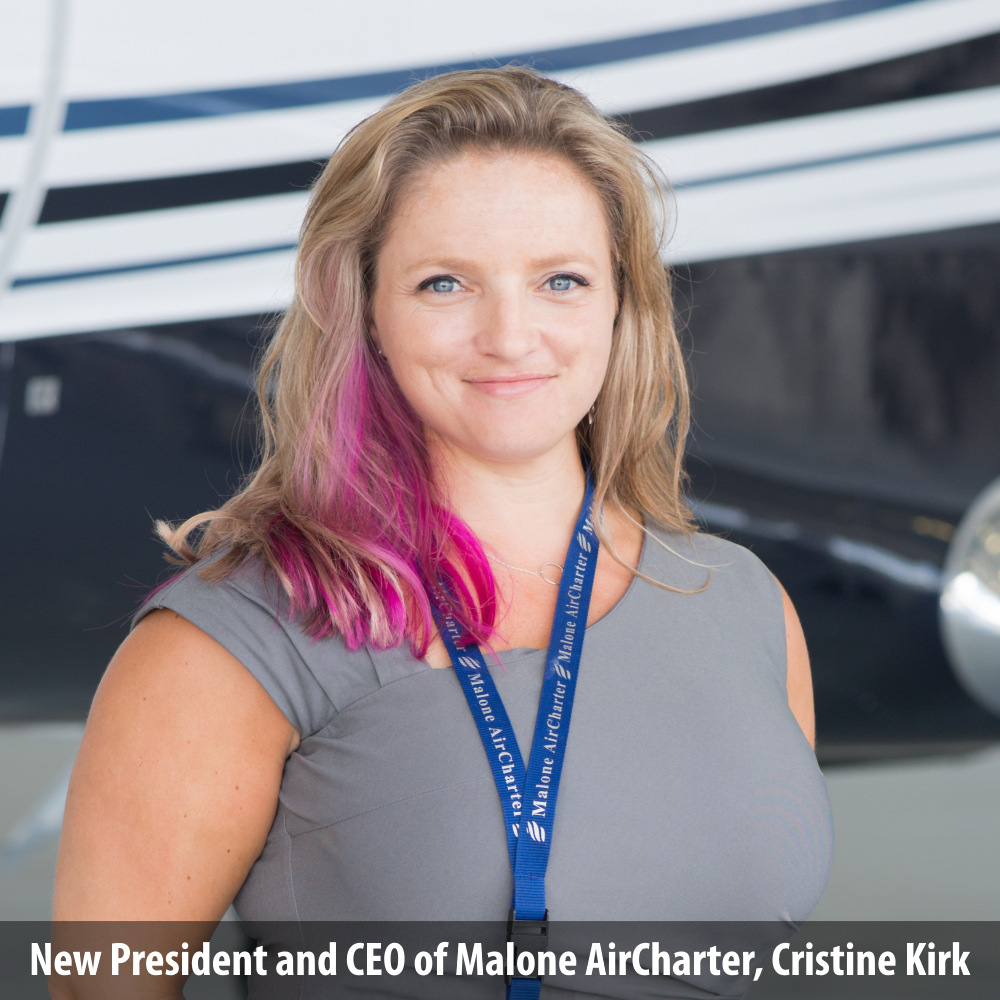 Malone AirCharter is pleased to announce a change of ownership from founders Melinda and Scott Malone to long time employee Cristine Kirk. On April 27, 2021, Cristine Kirk acquired all stock in Malone AirCharter and stepped into the role of President and CEO. After twenty years of growth and success under the leadership of Scott and Melinda Malone, along with Hayden and Irene Malone, they are beyond pleased that a valued member of the organization’s team was able to make the purchase and will carry on Malone AirCharter’s reputation of safety and excellent customer service. In an announcement to aircraft owners on Wednesday, April 28th, Melinda Malone said that “Cristine loves this business and has the passion and energy to see it thrive.” She also mentions that she and Scott Malone are “so impressed with her commitment to this company and excited for her future at the yoke.”

Cristine Kirk has been part of the Malone AirCharter staff since 2010, most recently as the Chief Financial Officer. Her dedication to the company was apparent from day one as she told the Malones that she intended to follow in their footsteps and run the place one day. Cristine says that she was inspired early on by the culture at Malone AirCharter. She mentioned “I was struck early on by what a joyful environment this was. It is a family company where you can hear people laughing together as they work. It was then that I knew I wanted to be a part of it and help grow the company into the future.”

Malone AirCharter has enjoyed unusual growth during the COVID‐19 pandemic, and the company expects that growth to continue in the months and years ahead. Cristine attributes that to the professional and dedicated staff. She mentions “when we emerged from the initial lockdown of the pandemic including six weeks of no flights, the entire team was eager to get in the air again. It was a collective effort to ensure our success at that time and it wouldn’t have happened so remarkably without everyone’s enthusiasm and dedication.”

Ms. Kirk will serve as President and CEO as the newly purchased company will retain the founders’ name and will continue as an impeccably managed aircraft management business and charter operator. Moving forward Ms. Kirk aims to expand Malone AirCharter’s offerings by increasing the fleet, adding to the staff as well as adding an additional location while never compromising on the exceptional customer service that clients and aircraft owners have come to rely on. Melinda and Scott Malone will retain ownership of the Hangar at KCRG that Malone AirCharter currently operates out of as well as the Citation Bravo that will stay under management of Malone AirCharter.

Melinda and Scott plan to take the month of May off and return to new roles at the company. Melinda will oversee regulatory compliance while supporting Cristine’s vision for the company and Scott will return to serve as Check Pilot while remaining current and qualified in Malone AirCharter fleet of aircraft including the Challenger 300, Citation Sovereign, Citation Excel, Citation CJ3 and Citation Bravo.

View This Press Release As a PDF